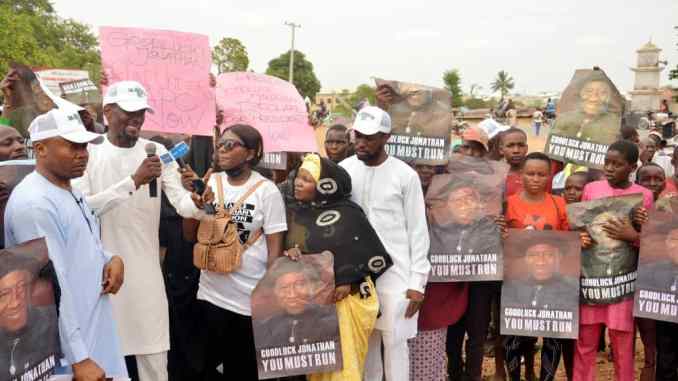 Days after the Youths Network for Nigeria Union (YNNU) urged former President Goodluck Jonathan to declare for the 2023 presidency, the group has handed the former president a seven- day ultimatum after Sallah to join the ruling All Progressives Congress (APC) and declare his ambition or face over 20,000 youths who will picket his office.

The pro-Jonathan group who turned up in their numbers at a rally in Suleja, Niger state, Wednesday warned that they will not vacate President Jonathan’s office if he fails to concede to their demand, adding that the future of Nigerian youths depends on his decision.

READ ALSO :  Miss Anambra Chidinma Okeke Finally Cries Out Says Her Blackmailers Who Leaked Her Videos Are Threatening To Shoot Her Dead If She Reveals The Real Truth To The Press

Chairman of the group Ibrahim A. Saiki while addressing the media at the rally said: “You may recall that on Friday, 22nd April, 2023, we led over 7,500 members of our Network to ‘a private meeting’ with former President Goodluck Jonathan, urging him to contest the 2023 presidential election.

“While responding to our plea, former President Jonathan urged the youths of Nigeria to get more involved in politics and asked us to “watch out” his next move.

“Since then, the media space has been awash with reactions to ex-President Jonathan’s comments, with several persons giving different interpretations. To us in YNNU, what Nigeria needs at this period of our national life is a unifier. That unifier is President Goodluck Ebele Jonathan.

“To this end, we have been mandated to, most respectfully, urge President Goodluck Jonathan to immediately progress to pick a membership form of the All-Progressives Congress, APC, from his ward in Otuoke, Bayelsa State, within seven days after Ramadan.

READ ALSO :  Ignore Osinbajo, Buhari is in a critical condition - Fayose says as he threatens to release 11 pictures of ailing President

“If at the end of seven days after Ramadan, President Goodluck Jonathan remains undecided, we shall most respectfully repeat our visit to his office for a Second meeting with President Goodluck Jonathan. It should be noted that over 20,000 of our more than 500,000-strong members across the nation have expressed the unreserved desire to participate and encamp at ex-President Jonathan’s private office, and we shall remain there for as long as it may take for him to decide.

“In furtherance of our position, we have written President Goodluck Jonathan a letter to this effect, which was acknowledged and received by his office yesterday, April 26th, 2023.

“We earnestly hope that President Goodluck Jonathan fully understands that our future depends on his decision. Therefore, we do not intend to relent in our pursuit of the true desire of Nigerians at this time- which only him can anchor.”

Some of the placards been displayed at the rally was emphatic on their demands. They include; ‘Jonathan you are wasting our time’, ‘Maigidan Goodluck Jonathan, our destiny in your hand’, ‘President Jonathan declare for President Now’, ‘Goodluck Jonathan You must run’, ‘We don’t care about party, any party is Ok’, ‘Jonathan run under APC Now’ etc.

READ ALSO :  Why I Have Problem With South-East People – Buhari

Also speaking, the secretary of the youth network Jonathan Akumobi and Women Leader, Mrs. Ozi-Bello Sadiq said they have been protesting since morning because they want Jonathan to understand the urgency of their request and the need to answer them without further delay.

According to Akumobi, “Goodluck Jonathan is a custodian of freedom of speech, he is a man with good heart. When he was the president the economy was good, the youths were employed and Nigeria was in the right direction, that is why we are urging him to run.”