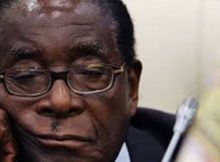 News of Robert Mugabe’s removal comes as MailOnline exclusively revealed that the elderly dictator had gone on hunger strike. One of his close family members confirmed that he was refusing to eat as a strategic ploy.

READ ALSO :  “My Husband Has Not Called His Son, Ever Since I Parked Out Of His House” – Tonto Dikeh Reveals

The frail 93-year-old Mugabe has not accepted any food since Saturday, the source revealed told Mailonline, as he continues to be held under house arrest at his Blue Roof mansion.

Mugabe’s nephew Patrick Zhuwao said on Saturday that Mr Mugabe was ‘willing to die for what is correct’.

A Zanu-PF minister confirmed to MailOnline that Mr Mugabe is also refusing to speak as part of his days-long protest.