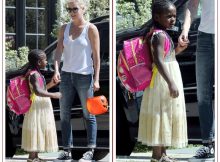 Actress Charlize Theron’s son is officially living as a girl. The 5 year old was seen out and about with his mum yesterday dressed in a yellow dress and sandals for girls. Charlize adopted Jackson in 2012, from her home country of South Africa.

Charlize Theron’s 5-year-old son Jackson appears to be transitioning – into a female.

When Charlize first brought Jackson home, she was raising him as a boy. But as time went on, Charlize appeared to use a more gender-neutral approach to raising/dressing him. READ ALSO :  Photos: Meet The 33year Old Virgin Who Says She Will Die A Virgin If She Doesn’t Get Married (Must See)