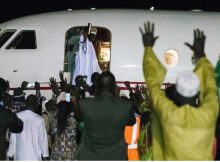 He was given a civilized and honorable exit from The Gambia to Conakry and subsequently to Malabo, Equatorial Guinea after he exhausted diplomatic mediation to persuade him to vacate office to allow his successor takes over.

Last 22 years Gambia has tasted bitterness from the government of Yahya Jammeh, who came in to power in a camouflaged bloodless coup on July 22nd1994. Jammeh overthrew Dawda Jawara, who ruled the tiny West African state from independence in 1965 to 22nd July, 1994 and ruled the country through threat.

Since he took over office from president Jawara, Jammeh began to grow into a wild man, dropping all the promises he made to Gambians on his first address of the nation. He became a absolute ruler and with his words the final decision. No one dares to broke all rules of the constitution

Fear and suspicion started to grow among Gambians, particularly those close to government institutions. Friends begin to distrust one another for fear of not discussion government matters with a wrong person which could cause their lives.

But now, he is gone and never to become Gambia’s president anymore. Are we going to allow the same situation to prevail gain in this new government? That absolutely should never happen again. When I analyzed Yahya Jammeh’s brutality and arrogance on Gambians, I tend to found that Gambians now! More than ever; need to improve on how we embrace and treat our leaders. It never occurred to him; even the slightest incline, that he would be defeated through election. Jammeh is a person that Gambians are yet to know.

Leaders are leaders and electorates are their bosses. Any action by the electorates –bosses- will determine how a government that they themselves mandated to govern them will look like. Let us not repeat the same mistakes that we made in the past. And Allah knows everyone make mistakes.

We must encourage civic education at grass root levels so that if not all but a good percentage of the population could be updated on the country’s political and other issues. This is what is called good governance.

One thing that stands clear is that it will take the new government a great deal of time to rebuild the Gambia. We must understand that the actions and statements made by many Gambians could have been prevented if Yahya Jammeh had ruled the country democratically. Why did he have to request for amnesty if he were sure of his cleanliness from all the brutalities he is alleged of?

Fundamentally, Gambians must not allow tribal and ethnic discrimination to tear them apart. We must remember that today, the possibility of what will bring us together supersedes what can crash us together. We are one people and one nation. For The Gambia, Ever True!