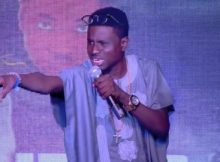 Veteran Nigerian comedians Alibaba, Julius Agwu, Klint D Drunk, Gbenga Adeyinka and Seyi Law have been confirmed to be among the eclectic line up of entertainers to perform at Kenny Blaq’s upcoming debut comedy show.

The aforementioned comedians will be performing at the show alongside the hottest musicians in the industry including Tuface, Adekunle Gold, Reminisce, Reekado Banks, Simi, Sound Sultan, Small Doctor among others

Kenny Blaq, who has been in the comedy industry for some years and has performed on some of the biggest entertainment stages in Nigeria, has promised that his performance at ‘The Oxymoron of Kenny Blaq’ will surpass anything he has done before. Over the years, the young comedian has become a special favorite of top celebrities and high-ranking individuals in the country and you can expect them to show up for the event.