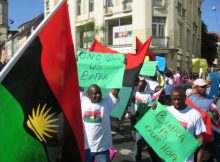 The Indigenous People of Biafra, IPOB, has issued a statement stating that it won’t disrupt the upcoming elections in Anambra despite a rally held on Saturday insinuating otherwise.

The group said it is not true that it plans to disrupt the election, saying that its only plan is to boycott the election because it will not be anything different from others that have been conducted in Nigeria.

“That they have perfected plans to rig the upcoming Anambra State Governorship election in favour of the most loyal Hausa Fulani slave among the contenders is not a secret.

“IPOB Intelligence Unit have uncovered plans by APC to import voters from Imo State with the help of Rochas Okorocha. Willie Obiano on the other hand is working hand in hand with Gov. Dave Umahi of Ebonyi State to bus in Northern youths resident in the state into Anambra to vote for Willie Obiano as a reward for signing up to the war against IPOB.

“At this moment, they have concluded plans to declare the APC candidate winner, whether people vote or not. What this means is that our vote doesn’t count. Voting is tantamount to legitimising illegitimacy,” IPOB said.