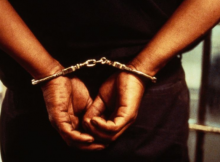 Esom Jehovah, a pastor of Assemblies of God Church in Imo, alongside his 21-year-old daughter, have been arrested for stabbing a nurse to death in Umuohiagu Autonomous Community of Ngor Okpala Local Government Area of Imo state.

According to reports, the victim approached the pastor over a missing phone battery and charger a neighbour gave to her to charge. The pastor’s daughter allegedly stole the items which were allegedly found with her later.

The said pastor reacted angrily to the confrontation, beating up the trainee nurse. Jehovah’s daughter was said to have run into the house to fetch a knife, while her father ith which she stabbed the victim, simply identified as Callista.

According to reports, the victim died on the spot.

A  source believed to have witnessed the incident was quoted as saying:

“ A boy in the compound had given the deceased a phone battery and charger to assist him recharge it, but Pastor Esom Jehovah’s first daughter stole the items, which were later found in her custody five days after.

“But the Pastor reacted angrily to the allegation against his daughter and beat up the deceased mercilessly before his daughter went and picked a kitchen knife and stuck it deep into her back while her father held her down.”

The eye witness account revealed that the knife pierced through the back of the victim and came out through her chest which made her bleed to death.

The pastor, his wife and another clergyman trying to aid his escape have been arrested by policemen attached to the Umuneke Ngor Divisional Police Station.

His daughter is said to be on the run

The victim’s corpse has been deposited at the Holy Rosary Hospital morgue.