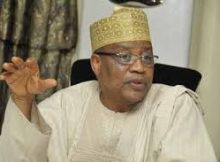 Nigeria’s former President Ibrahim Babanida has called on Nigerians to ensure they live in peaceful unity with one another.

“As an active participant in the Civil War and a retired military officer, with the hard lesson learnt, I will never be tired on calling for the oneness and unity of our great nation. We will forever be ready to sacrifice for a united and prosperous Nigeria whenever the need arises

“During our tenure in government we deliberately formulated policies, programmes, projects and even the creation of states to further weaken unwholesome agitations for secession and promote mutual and peaceful coexistence devoid of ethnic, religious and regional discriminations.”