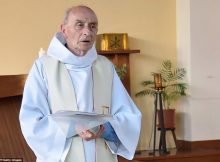 A Catholic priest was forced to kneel by two men armed with knives before they killed him by slitting his throat.

A nun who witnessed the deadly attack said the killers of 85-year-old Father Jacques Hamel also filmed the murder at the parish church in Normandy and gave a “sermon around the altar in Arabic”.

A worshipper is also fighting for their life in hospital after being seriously wounded during the hour-long siege, which started after the knifemen stormed the building in Saint-Etienne-du-Rouvray, near Rouen, during morning mass.

:: History Of Deadly Attacks In France

The alarm was raised after one of the nuns escaped.

The murderous pair were shot dead by police as they came out of the church reportedly shouting “Allahu Akbar”.

One of the attackers has been identified as 19-year-old Adel Kermiche, who had twice attempted to travel to Syria.

He was only released from jail in March on an electronic tag and was on a terror watch list.

Describing the murder, the nun, identified as Sister Danielle, told French TV: “They forced him to his knees. He wanted to defend himself. And that’s when the tragedy happened.

“They recorded themselves. They did a sort of sermon around the altar in Arabic. It’s a horror,”

She said of her dead colleague: “He was an extraordinary priest. He was a wonderful, kind man.”

Islamic State claimed two of its “soldiers” carried out the deadly assault.

Visiting the scene of the atrocity, French President Francois Hollande, described it as a “vile terrorist attack” and vowed to fight the IS extremists “using all means possible”.

:: Who Were The Normandy Church Attackers?

Anti-terror chiefs have been appointed to take charge of the investigation and have arrested one person in connection with the attack.

French media have also reported the church targeted in Tuesday’s attack was one of several Catholic sites on the hit-list of a 24-year-old Algerian student.

Sid Ahled Ghlam was arrested last year on suspicion of murdering a mother-of-one during a botched attempt to attack a church in Villejuif.

He was sent by Belgian Abdelhamid Abaaoud, who directed a cell which carried out the 13 November attacks in Paris during which 130 people were killed and the 22 March attacks in Brussels that killed 32 people.

Pope Francis also expressed his “pain and horror” and said he was appalled by the “barbaric killing”.

The attack comes almost two weeks after the Bastille Day massacre in Nice which left 84 people dead after Tunisian Mohamed Lahouaiej Bouhel drove a truck into a crowd celebrating the national holiday on 14 July.

France has been under a state of emergency since the terror attacks in the capital last year.