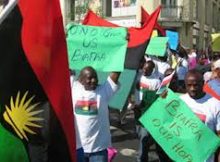 The Abia State Police Command has announced that at least 59 suspected members of the now outlawed Indigenous People of Biafra, IPOB, have been arrested by security officials.

The Abia State Commissioner, who made this announcement, said the suspected IPOB members will be prosecuted for murder, arson and other related offences

Ogbizi made this announcement during a press briefing and parade of seven suspected members of IPOB at Ariaria police station in Aba.

READ ALSO :  #BBNaija: “How Bisola’s Husband To Be Abandoned Her On The Alter On Her Wedding Day” – Social Media User Reveals

He said following the proscription of IPOB by governors in the South East and its declaration as a terrorist group by the Nigerian Army, anybody found with Biafra materials would be arrested and prosecuted.

He said that they would be prosecuted under the Anti Terrorism Act to ensure they were properly dealt with.

Ogbizi said, “IPOB by their action had shown itself to be a terrorist group, which must be dealt with as such. Between September 10 and September 14, 2017, the Ariaria police station was attacked by suspected members of IPOB, who destroyed everything in the station.

“Even some policemen were seriously injured. In fact, as I am talking to you, one of the injured police officer is dead. Doctors tried in vain to save his life.

The police added that suspected IPOB members attacked military officers and the residences of Commissioner of Police and AIG Zone 9 in Umuahia.

“As I am talking to you now, information reaching me said they have started gathering at Nnamdi Kanu’s house”, he said.