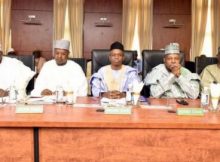 President Muhammadu Buhari has sent northern governors to the south-east in a bid to secure the peace, TheCable gathered.

In addition to south-eastern states, they will also visit Cross River and Rivers.

The team of five governors is led by Kashim Shetimma (Borno), who is also the chairman of northern governors forum.
Others on the peace mission are Aminu Masari (Katsina), Aminu Tambuwal (Sokoto), Atiku Bagudu (Kebbi) and Abdullahi Ganduje (Kano).

The deployment of soldiers to the south-east to quest secessionist agitations by the Indigenous People of Biafra (IPOB) has generated a lot of heat in the last two weeks.