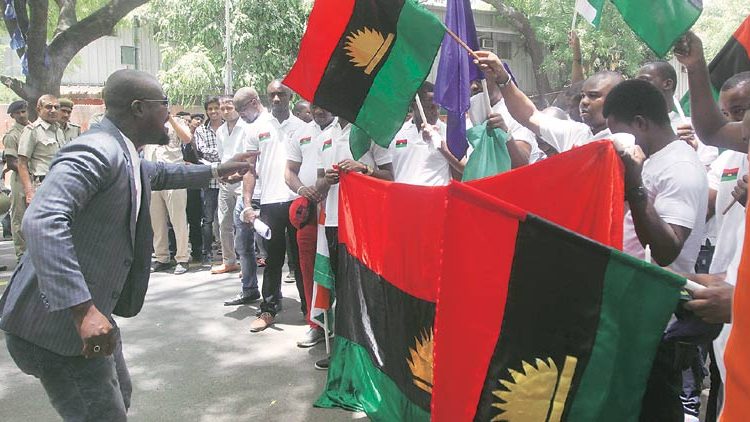 The Indigenous People of Biafra, IPOB, has identified what it described as the biggest problem of the Igbo nation.

The pro-Biafra group said on Saturday that the main problem of the Igbos was that their leaders were undermining the collective interest of the people.
The Indigenous People of Biafra, IPOB, has identified what it described as the biggest problem of the Igbo nation.

The pro-Biafra group said on Saturday that the main problem of the Igbos was that their leaders were undermining the collective interest of the people.

READ ALSO :  From Borno To Sokoto, Why Northern Elite Are Obsessed With Finding Oil In The North

IPOB in a statement by its Media and Publicity Secretary, Comrade Emma Powerful, traced what he called the bad leadership in Igbo land to the era of the late Ukpabi Asika, who served as the administrator of the defunct East Central State after the Nigeria –Biafra war.

He regretted that subsequent Igbo leaders had also not provided the much needed inspirational leadership. The statement read, “The issue is not about Igbo leaders not doing enough to promote Igbo interest. The problem is that Igbo leaders are actively engaged in the undermining of collective Igbo interest. With the notable exception of Governor Nyesom Wike of Rivers State, the rest are mere errand boys for Abuja and the caliphate.

“They are visibly terrified of their Fulani masters and would not want to do anything to jeopardize their cherished lucrative relationship with their masters in the North. The supposedly apex socio-cultural organization Ohaneze Ndigbo is considerably worse.
“The problem of bad leadership in Igboland started immediately after the war. From the imposition of Ukpabi Asika as the administrator of the then East Central State, Igbo have never had good and honest leaders.

“They have honest social critics and commentators, but rarely good leaders. Every leader you see in Igboland today was placed in office by the caliphate. The Fulani caliphate decides who becomes governor, senator, Ohaneze Ndigbo president general and so on.

“These supposedly Igbo leaders are on record as being the first set of people to condemn IPOB and invite Hausa Fulani soldiers to come and kill Biafrans. Many people don’t know that IPOB has even more significant presence in Igweocha (Rivers State) than anywhere else in Biafra land, but you don’t hear Ijaw, Ikwerre Igbo, Ndoni or even Ogoni politicians castigate IPOB the way Igbo politicians do on a regular basis. That tells where their loyalty lies. “Yoruba elders never publicly condemn OPC, Arewa Consultative Forum till date has not offered any categorical condemnation of Boko Haram and Fulani herdsmen, but Igbo leaders themselves canvassed that government should deploy soldiers to the South East to kill innocent agitators.
“These same leaders never ran to Buhari to send soldiers to stop Fulani herdsmen from slaughtering our people all over Enugu State, but when it came to IPOB agitating to free everybody from the Nigerian bondage, they found the courage to invite the army to invade Igboland.”

“Zik was an impediment to Igbo and Biafra progress within Nigeria, hence our repudiation of all that he stood for. Zik’s dream and greed to lead the world’s biggest black nation just to rub shoulders with the western leaders, put us in this mess.

“Despite his undoubted brilliance and intellectual, Zik was not a very good politician. He remains till date the only person that led an independence struggle and never got the chance to lead the country after independence. Unfortunately, the present day Igbo leaders have continued in that failed politics of Zik.

“That is why today we are discussing cows instead of industries, science and technology, begging Fulanis to stop killing their fellow Nigerians and to allow the existence of Nigeria to be renegotiated into acceptable standard of governance to usher in political stability, economic growth and modern development.”