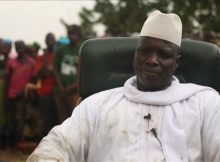 The presidents of Guinea and Mauritania arrived in Gambia on Jan. 20 for negotiations, and ECOWAS is pushing for a diplomatic resolution.

The 15-member bloc set a noon deadline and Jammeh is asking for an extension to 4 p.m. local time. Late Jan. 19, troops from neighboring Senegal — an ECOWAS member — crossed the border into Gambia, preparing to intervene on behalf of newly inaugurated President Adama Barrow.

Senegalese troops appear to have remained near the border not far from Nyantempo. Former President Yahya Jammeh lost elections and conceded defeat Dec. 1 before reversing his decision.