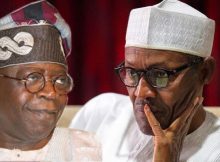 The National Leader of the All Progressives Congress, APC, Bola Tinubu, has slammed President Muhammad Buhari’s lack of political will to adopt the National Conference Report, which gives room for fiscal federalism.

Tinubu, who aligned himself with the former Vice President, Abubakar Atiku, on the call for the restructuring of Nigeria, faulted Buhari’s calculated attempt to throw the Confab report into the archives.

READ ALSO :  Kanu looking forward to being vindicated as trial continues Nov 10 – Lawyer
Tinubu, stated this on Monday, June 20, through his most trusted representative and Chairman, Editorial Board of the Nation Newspaper, Sam Omatseye, in his usual weekly column.

Omatseye, who usually represents Tinubu in some high profile functions, delivers speeches on behalf of the APC National Leader, as well as come in his defense by writing rejoinder, stated this barely 24 hours when the President arrived Nigeria, after spending 14 days in London for medical treatment.

Recall, that Buhari had recently said that he has consigned the Confab report to the trashcan, saying that his administration will not bother to look into the report.

Condemning Buhari’s utterance, Tinubu said; “The Governors clasp bowl in their hands every month, to the counterfeit mercies of the center.

“The APC highlighted this in the course of the campaign. For all its tendentious politics, the conference in the twilight of the Jonathan era, afforded a platform for more robust dialogue.

“It was therefore, a historic error that Buhari tossed it into the archives. That big, dark vault of nothingness called archives. The time will come, when we shall build a museum of suggestions, paradigms and solutions ignored generation after generation. All the ceremonies, tea breaks, lunches, deliberations, perorations, communiqués and tomes of recommendations turn into ashes in a bonfire of time,” he stated.

He maintained that, it is a waste of scarce resources, and contempt for ideas, for Buhari to discard the report spearheaded by former President, Goodluck Jonathan.

“If Buhari ignores the call to restructure Nigeria, it will haunt him, as he tackles our lopsided being. I expect the call to increase in its stridency in the coming months.

“The National Assembly lacks the courage, or even the depth to push it. This new restructuring fever might be another fight in futility”.

While criticising Buhari’s hostility to new ideas, he maintained that the cries for restructuring, may make the country a “catacomb of echoes, room after room, relaying the same calls. But the audiences are dead, with worse than ear infections”.

Drawing a conclusion, angry Tinubu said: “I am for restructuring. The federal system sits a centre like a leviathan in shallow waters, ponderous, stuck and “swimless,” and at the mercy of the nibbling rapacity of a swarm of small fishes.

READ ALSO :  2023: Jonathan gets 7 days ultimatum to declare for presidency

“We cannot sustain a system where the centre owns over half of our money, our power, our morality, our constitution. It is a garishly decorated monarchy, a throwback to our monarchical and feudal loyalties with a despotic shadow of our military past”.