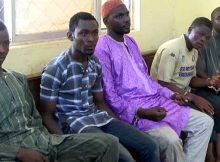 The five suspected killers of 74 year old Mrs. Bridget Agbahime, the Christian woman who was murdered for allegedly making a blasphemous statement at Kofar Wambai Market in Kano state on June 2nd, have been released. The police had at the time of the incident arrested the suspects in connection with the murder and had immediately slammed a four-count charge of allegedly inciting disturbance, culpable homicide, joint act and mischief on them.

At the hearing of the case today, the Chief Magistrate, Muhammad Jibril, discharged the five suspects and terminated the case as advised by the attorney-general of Kano State.‎

The Principal State Counsel, Rabiu Yusuf, who represented the attorney-general of Kano State told the court that there is no case to answer as all the suspects were innocent and should be discharged immediately.