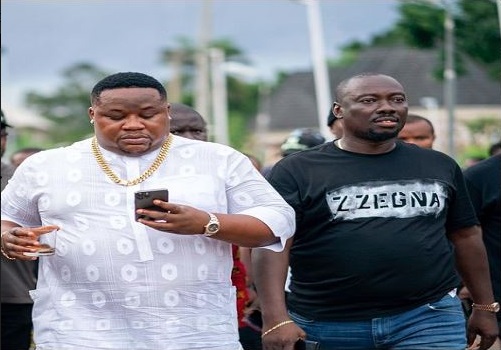 Popular hypeman Cubana Chief Priest has confirmed the reports that his former boss and mentor, Obi Cubana is being held and quizzed by the EFCC.

On Monday, November 1, the Abuja-based socialite arrived at the EFFC headquarters at Jabi where he was interrogated by operatives of the anti-graft commission.

Though allegations against Obi Cubana were sketchy as at press time, a source disclosed that his case bordered on alleged money laundering and tax-related issues.

Reacting to the news, Cubana Chief Priest via his Instagram page shared a photo with his former boss.

Captioning his post, “Ezemuo” asserted the embattled mentor will eventually rise above his current predicament while also advocating for his release.

He wrote: “What Doesn’t Kill Us Makes Us Stronger, We Igbo’s Re Used To This, Mbakala Ga Ama Ozo Mana Ozo Ga Ala. #FreeObiCubana.”