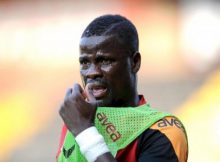 There are reports former Arsenal player Emmanuel Eboue has been diagnosed with HIV.

There had been widespread rumors in Turkey that Eboue had contracted HIV and on Sunday, his agent, Tekin Birinci, posted an update on Facebook, saying:

“Unfortunately is true that we are facing some medical problems about Eboue. He will go to England… so we will know how serious it is.”

It’s claimed the virus was discovered as he was having a medical for Cypriot side Limassol.

The 34-year-old spent seven years at Arsenal before joining Galatasaray in 2011. He won three Super Lig titles, the Turkish Cup and two Super Cups with the Istanbul club.

How will this affect his career? HIV doesn’t prevent you from playing football.