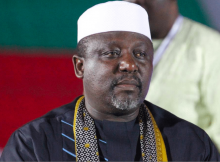 Imo State Governor, Owelle Rochas Okorocha has em­powered 305 youths from the 305 wards across the 27 local government areas of the state with the sum of One Million Naira (N1 million) each, instantly transforming them into millionaires. “I declare myself the grand patron of all the Youth Million­aires”, Governor Okorocha de­clared during a brief cheque-hand-over ceremony at the government house in Owerri on Thursday, July 13.
According to him, the ‘One Million Naira’ largesse was to encourage the youths to suc­ceed and begin to contribute to the progress and prosperity of the state and the country. He assured the beneficiaries of his assistance towards making sure that they prosper in their business endeavors.

“Henceforth if you encounter problems in running your var­ious businesses you should feel free to consult me by channeling your difficulties through the Chief of Staff. My dream is to make sure that in the next one year your story will change for better”, he told the elated youth millionaires.

Okorocha, according to a statement issued by his Chief Press Secretary, Sam Onwue­meodo, disclosed that the ges­ture was in line with his dream to reduce the poverty rate in the state to 5percent from the current 14percent.

The governor gave a brief outline of his administration’s efforts to uplift the poor in the state:

“We have employed ten young graduates from each of the 305 wards totaling 3050. We have empowered ten women in each of the wards with N100,000 also totaling N305million.