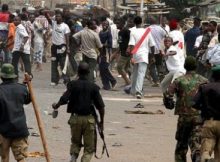 There is an ongoing clash between Hausa and Igbos in Jos, the Plateau State capital.

According to reports, many people have been injured in a clash along Rwang Pam street, an area said to be dominated by Igbos, and Ahmadu Bello way.

Some reports say youths were stoning themselves.

Police and other security officials have, however, arrived to calm the situation.

There had been tension in the state following rumours of an impending attack on Igbo residents because of the reported assault on Hausa in Port Harcourt, Rivers state, earlier on Thursday.

Igbo traders in Jos closed their shops earlier than usual out of fear of reprisal.