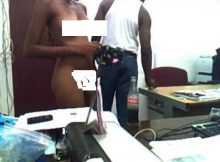 Nation Media Group in Uganda has sacked two of its employees after they were caught on camera having s*x in the office. Kevin Kaija, a producer of “Seeds of Gold” programme aired on NTV and Ann Nakawombe (photo below), a presenter at the same station, have been sacked after photos of them having s*x in the studio leaked. NTV has also released a statement regarding the matter.

READ ALSO :  Rapper Waka flocka blast his wife for going out in see through top with no bra The statement by NTV also said: “Anne has been the presenter of Login while Kevin worked on the Seeds of Gold program as a producer. These employees were found to be in breach of the NTV Employee Code of Conduct as stipulated in their terms of employment,

READ ALSO :  Ebube Nwagbo puts her hot bikini body on display
“At NTV, we hold ourselves to the highest standards of values and integrity in thework place to ensure that we are a trusted and credible source of information and entertainment. We do not condone unethical or questionable moral character,”read the statement. READ ALSO :  “When I Die, Please Marry My Wife And Father My Kids” – Ghanaian Rapper Begs His Manager