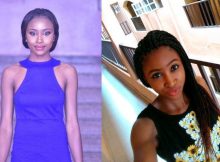 Since the story of the s*x video involving former Miss Anambra, Chidinma Okeke, broke a few weeks ago, several groups and individuals have come forward with different versions of what transpired between the embattled 20-year-old beauty queen and the organisers of the pageant.

READ ALSO :  Jonathan Finallu Speaks Out: I Didn't Hand Over A Collapsed Nation To Buhari - Dr. Goodluck Ebele Jonathan.
The former beauty queen was seen in a shocking x-rated video with a lesbian partner. Surprisingly, the video was released on October 11, 2016, a few days before the expiration of her tenure originally billed for October 28, 2016.

Every day across the state since the video hit the streets, different versions of what led to the scandal are churned out by the actors, leaving the people confused and unsure of what to believe.

Since the scandal broke, Miss Chidinma Okeke, who won the Miss Anambra beauty pageant, organised by the Anambra Broadcasting Service (ABS), has remained incommunicado, choosing to go into hiding over alleged threats to her life. She has also remained silent, leaving her lawyer to do most of the talking.

While the father, Sir Jeremiah Okeke, had claimed in recent reports that his daughter had been handed over to a relation for safety, some others claimed that the ex-beauty queen had relocated abroad.

But after weeks of keeping quiet, Miss Okeke has finally broken her silence. In an exclusive interview with The Nation, she debunked claims that she threatened to commit suicide, adding that there was never a time such thought came to her mind. She also said her life might no longer be in danger, adding that her traducers were no longer threatening her life, and maintaining that those who were after her life had stopped contacting her.

She also said the faces behind her agonizing period in Anambra would be revealed soon, adding that with God, all things are possible.

Narrating her own side of the story, she said:

“Early last year, the ABS advertised for the Miss Anambra beauty pageant. I heard of it and went to make enquiry.

“My roommate was also interested, but one of the organisers told me to apply. I told them I was not interested but the man insisted that I might win the competition. He also promised to give me the form for free if I indicated interest, and he did when I agreed to contest.

READ ALSO :  See The 21-Year-Old Saudi Arabian Activist Whom They Are Preparing To Behead And Crucify His Body

“But one Jane told me that before a winner would be declared, there were certain things to be done, including the (sex) video. I consented after some persuasion from the organisers. I later went for the contest at the Marble Arch Hotels in Awka, and I was declared winner with a Kia Rio vehicle as star prize.

“When I went for my car after the contest, the organisers brought out a contract form for me to sign, but I told them I wanted to contact my lawyer to see it. I was not given the opportunity to do so.

“What they kept telling me was that if I insisted on not signing the contract or wanted to contact my lawyer, they would release the video.

“At that point, I became uncomfortable and signed the contract to avoid such embarrassment, and the car was released to me from where it was packed within the premises of ABS.

“From that moment, I became a slave to them. On October 11, 2016, they called me to come and make presentations inside the office of one the organisers. After that, the man excused some people in that room and showed me the video again.

“They told me to drop my car and removed my crown from me. I told them I would take the car as stipulated in the contract. They insisted I should pack it in the premises of (ABS).

“I told my uncle in Abuja about the situation. My uncle called them and asked them to release my car to me. Instead, they forwarded the video to him as part of the blackmail. That was what happened,” Chidinma said, crying.

She also said the scandal had weighed her down. Amidst sobs, she denied being a lesbian, saying she had never been involved in the act.

For her parents, Sir Jeremiah and his wife, Lady Nora Okeke, the incident remains a shock. According to Sir Okeke, the management and organisers of the pageant capitalised on his daughter’s “age and naivety to deny her whatever monetary gains she made while serving as Miss Anambra.” “How can a beauty queen borrow money to pay her driver, even when she is supposed to be receiving a monthly salary?

“I cannot say all that I heard or saw. Why was she not paid her winning prize of one million naira fully? Rather, they paid her on installmental basis. And up until today, the money has not been completely paid.

READ ALSO :  Linda Ikeji Has Become Too Materialistic And Has Lost All Her Godwill She Is No Longer An Inspiration – Jola Sotubo

“They have rubbished her and rubbed the family’s name in the mud. But we have united as a family, praying seriously for my daughter and for the people behind this wicked act to be exposed.

“My family at first agreed not to tell me about the whole thing, because I am hypertensive. But they decided otherwise when things got out of hand. I told them this issue will not kill me because I have had worse experiences while in business years back.

“My God, as always, will answer me and expose the truth in no distant time. I won’t say much because the damage has already been done.

“Chidinma is a small girl who does not know anything, hence, she fell into a trap that was too heavy for her to shoulder. But I thank God she is recovering.”
All through the interview, Chidinma’s mother, who was advised by the husband to remain silent, continued to hiss, and motioning her hands towards the heavens in supplication to God.

Two of the chiefs in Ogboji community in Orumba South Local Government Area, where Chidinma hails from, Chief Obi Okoli (Idejimba) and Chief Julius Nwankwo (Nwabulu-Omee), told The Nation that the incident had left them in shock.

Okoli, who described Chidinma as a nice and well-trained girl from a Christian home, saw the entire thing as a set up, but argued that such issues would only happen if somebody presents oneself.

According to him, “she is a well brought up girl from a good family background and Christian home. There could be more to this than meets the eyes.”

Asked if the community was not going to say anything on the sex scandal involving their daughter, Okoli laughed and said: “There are ways of handling such issues, and I don’t think the community will be involved.”

Also speaking, Chief Julius Nwankwo, described the situation as a pity, adding that today’s children behave as they like.

However, he said that the people of Ogboji community were seeing it as blackmail, adding that none of them was happy with what happened to their daughter.

“As an Ogboji man, I am pained that such a thing happened to one of our own, and that is why we want the authorities concerned to look into the saga appropriately, with a view to arresting those involved.

“When our daughter won the award, we were happy. For anybody or group of persons to rubbish her and our community is what we will not condone.”
Nwankwo said they heard some people had been apprehended over the sex scandal, adding that the authorities should look well in making sure that wrong people were not punished.

The Managing Director of ABS, the organisers, Uche Nworah did not comment on the queen’s allegations when we contacted him. He instead referred us to the organisation’s earlier statement.

In the earlier statement, the organisers had dissociated themselves from the scandal. Part of the statement read: “The attention of the management of the Anambra Broadcasting Service, organisers of the Miss Anambra Beauty Pageant, has been drawn to a video with lurid contents purportedly showing former Miss Anambra, Miss Chidinma Okeke (Miss Anambra 2015).

“The said Miss Chidinma Okeke, who is allegedly linked to the lurid content in circulation, has served out her term as Miss Anambra 2015 and handed over the crown in line with the terms and conditions of The Miss Anambra pageant.

“We condemn in clear terms any amoral behaviour/conduct as suggested by the alleged lurid content in circulation and do not condone such.

“It is on record that The Miss Anambra Beauty Pageant has been a platform to empower Anambra women and celebrate our rich culture and heritage. Winners of the pageant are bound to contracts to be of good conduct and moral behaviour and to uphold/maintain the honour in their position as queen.

“Winners of the pageant also contract to refrain from any personal relationship that could appear to hinder their ability to perform the duties of their office as queen and role model, and we do not expect any less.

“We, therefore, wish to dissociate The Miss Anambra pageant from any discussions on the said allegations.

“We feel sufficiently perturbed by the mere reference already made to the pageant and hereby state that we are in no way connected to the controversy.

READ ALSO :  Shocking! Man Who Supposedly Turned Into A Cockroach At Night Got Caught In A Rim When He Woke Up (Photos)

“We apologise to the government and good people of Anambra State, our sponsors, supporters, friends and all those associated with the Miss Anambra project for the embarrassment the mere reference to the pageant in the controversy may have caused whilst reassuring of the good intentions of the Miss Anambra pageant franchise.”