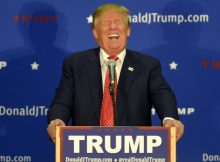 U.S. President Donald Trump said he wouldn’t want a poor person in charge of the economy, as he defended his cabinet, which is thought to be the wealthiest in the country’s history. .

“Somebody said, ‘Why did you appoint a rich person to be in charge of the economy?’” he told supporters at rally in Iowa. “So I said …because that’s the kind of thinking we want… because they’re representing the country. . Making a particular reference to Commerce Secretary Wilbur Ross, a billionaire former investor, Trump said:, “They don’t want the money. And they had to give up a lot to take up these jobs.” .

Trump, himself a billionaire, went on to refer to Gary Cohn, his chief economic advisor. “This is the president of Goldman Sachs. Smart. Having him represent us, he went from massive paydays to peanuts, to little tiny … I’m waiting for them to accuse him of wanting that little amount of money. .

And I love all people, rich or poor, but in those particular positions I just don’t want a poor person. Does that make sense? If you insist I’ll do it but I like it better this way, right?” .

Trump’s Secretary of Education Betsy DeVos is also a billionaire heiress, while Secretary of State Rex Tillerson, the former boss of oil giant Exxon, is thought to be worth hundreds of millions of dollars. .

Other rich appointees include Treasury Secretary Steven Mnuchin, a former hedge fund manager, and Housing Secretary Ben Carson, who made his fortune selling books on his career in medicine and his political ideas.