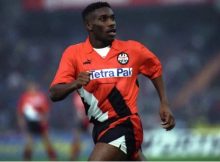 Oliver Kahn disclosed that he was yet to recover from the wonder goal he conceded against Nigeria’s Austin Jay Jay Okocha in a Bundesliga fixture between Eintracht Frankfurt and Karlsruhe in 1993.

The goal was voted as 1993 Goal of the year by viewers of Sportschau (an ARD German TV sports programme).

Kahn’s tweet attracted comments from football fans on Facebook, google and tweeter about the career of the two football icons.

While Kahn moved on to become one of his country’s great goalkeepers, Okocha developed into Africa’s shining star and role model in different leagues across Europe.