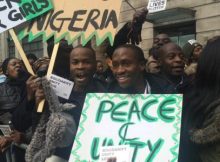 The United States embassy in Abuja on Thursday was thronged by Nigerians protesting the nation’s refusal to treat the Indigenous People of Biafra (IPOB) as a terrorist group.

The protesters were drawn from several groups in the nation.

Comrade Richard Augustine, National Coordinator of the protesting group, Stand Up For Peace Movement, said it was annoying that a spokesperson for the US Embassy in Abuja publicly came out to counter the Nigerian government for labeling IPOB as a terrorist group.

READ ALSO :  Gambia: Police Imposes Ban On Drumming, Others In The Gambia

“People of the world, let it be known that we respect the United States, US, a lot. We will therefore not want to believe stories that certain persons in the US Mission in Nigeria have been funding the activities of the Indigenous People of Biafra, IPoB, for the twisted intent to destabilize our country.

“We, therefore, wonder when Nigeria became a colony of the United States of America for its diplomat to be insinuating that the laws of Nigeria amount to nothing if they are not domesticated as US laws.

“It even more ridiculous that the US Embassy was here in Nigeria all the time IPoB and it’s leader, Nnamdi Kanu, saturated and suffocated the public space with hate speech and did not seem it fit to urge restraint. We know the US Outpost was monitoring the situation and would add the sin of habitual lies to it’s long list of transgressions if it claims otherwise.

“The Embassy was there when Kanu and IPoB bragged about possessing nuclear weapons that could decimate a third of Nigeria and it looked the other way even though we all know the same country would froth in the mouth each time North Korea and nuclear weapon occur in the same sentence.

“We suspect that the $500 Million Syrian Train and Equip Program of the US is connected with the container load of firearms that the Nigerian Customs Service has intercepted in recent months. In a little under eight months, Customs has intercepted over 4,000 shotguns and rifles shipped from Turkey – around the same area where the US programmes was being implemented. The similarity is haunting because the same way the US refused to see the killers in the Middle-East as terrorists as it called them “moderate rebels” it is also recognizing IPoB terrorists by another name.

“These are terrorists that have openly boasted in online fora about how the US will supply them arms so it is no surprise that arms shipments are arriving Nigeria from Turkey, a US ally and that this same country is saying the intended recipients of these arms are not terrorists. It must also be recalled that Nnamdi Kanu solicited for arms from IPoB US-based members.

“We would therefore wish that the United States would learn from its serial misadventure in meddlesomeness. Vietnam Bay of Pigs, Cuba Contras in Latin America, Taliban in Afghanistan, Iranian debacle, Iraqi disaster, a contrived Arab Spring,?Libyan descent into chaos, Yemeni meltdown, Syrian logjam, Ukranian farce and now the IPOB in Nigeria after defeating Boko Haram. The ongoing North-Korean miasma. And an endless stream of failed interventions should have all taught the US to stay out of meddling with sovereign entities.