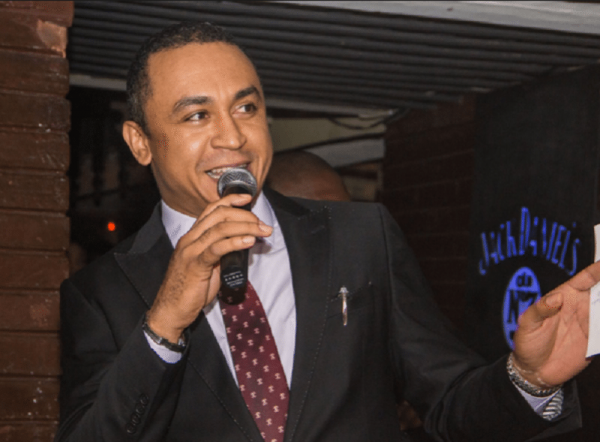 Controversial on-air personality (OAP), Daddy Freeze has explained why it’s more rewarding to patronize a nightclub by buying their liquor, than giving it to a Pentecostal church.

Freeze said this after Quilox boss, Shina Peller saved accident victims over the weekend, along Sagamu road using his mouth to “draw fuel” from a bus as FRSC ambulance had none.

Freeze took to his Instagram page to upload photos of Shina and wrote:

“Why it’s more rewarding to use your money to buy liquor in @shinapeller‘s nightclub #Quilox than for you to give it to a Pentecostal church.

READ ALSO :  Man Arrested And Denied Bail For Naming Pet Dog ‘Buhari’ In Ogun State
“There was an accident along the Lagos Ibadan expressway and my good friend from the same hood as I, SHINA was passing by. Not only did he stop to help, he syphoned fuel with his mouth because the ambulance on the scene did not have enough fuel. He also gave one of his vehicles to take the injured to the hospital.
“How many of your fake ass Daddy GOs would do this? How many of them would use those their dirty, lying ass mouths anointed by Satan himself to draw fuel? How many will ever stop?

“Many of the accidents along that road are caused by the traffic around the numerous satanic institutions set up where developed countries would have set up factories.
“When Jesus was alive he drank alcohol and was accused to be in the presence of sinners (possibly in Night Clubs) so enjoying a bottle of Champagne or Henny with coke and ice at quilox in responsibility and moderation is actually Christ-like.

READ ALSO :  A MUST READ! How This Woman Sells Daughter’s Baby For N150,000 In Abia
“Matthew 11:19 NIV: The Son of Man came eating and drinking, and they say, ‘Here is a glutton and a drunkard, a friend of tax collectors and sinners.’ What could he have been drinking that they labelled him a drunkard? Lucozade boost?
“More so, another reason to patronize them lies in the fact that the club employs people who earn a living through it and it pays taxes as instructed by our first pastors, the disciples; something most pastors and churches are blatantly disobeying.

“Romans 13: NIV [6] This is also why you pay taxes, for the authorities are God’s servants, who give their full time to governing. [7] Give to everyone what you owe them: If you owe taxes, pay taxes; if revenue, then revenue;

“Here are my 2cents, stop over at quilox on a Friday and empty your pockets there, so the thieves won’t have anything to steal from you on Sunday, while you are at it, drink responsibly! ~FRZ #FreeTheSheeple”.