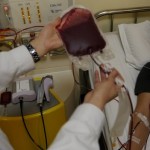 It’s an astonishing act of human generosity – one man donating his stem cells to a total stranger living on the other side of the world.

A man working as a driver in Shanghai registered for a stem cell registration drive through his workplace, thinking little would come of it. Shortly after, he received word that his stem cells had been matched, to a boy in England. The needy recipient is just seven years old.

The driver, Jiang Yongfeng, agreed to the donation without hesitation.

“I was very surprised. I was so excited to get a match so soon. Fate was knocking on my door,” he says. “When I learned the boy was only born in 2007, I was even more confident I made the right decision.”

It’s a good thing Mr Jiang was so eager. Those needing stem cell transplants to treat cancer or other immune diseases must find a donor with near identical genes. In reality, that means the matched pair must have the same ethnic background so the immune cells of the donor and recipient work in tandem.

That small percentage makes the long-distance match between Jiang Yongfeng and the little boy something akin to a medical miracle.

The little boy receiving Jiang’s donation is of Chinese heritage. He’s lucky that Mr Jiang gave a saliva sample in order to sign up for the stem cell registry, since relatively few in China have signed up for the scheme. Chinese people make up approximately 20% of the world’s population, but only 4% of people on the global stem cell registry are of Chinese origin, explains the OtherHalf Chinese Stem Cell Initiative.

A match between someone living inside China and another living outside China’s borders is particularly rare, explains Dr Zhang Yi from the Shanghai division of the Chinese Red Cross, the organisation managing the donation.

“There are fewer people of Chinese origin in European and American countries, so most matches are within China,” says Dr Zhang. “We have found only 320 matches using the Shanghai database, out of 13,700 potential donors.”

The donation experience was relatively painless for Jiang Yongfeng, the driver.

Some are still required to donate stem cells by extracting bone marrow, a more complex procedure that uses a needle to withdraw cells in the marrow directly from a donor’s pelvic bone. However, Mr Jiang was able to use a different method that extracts cells using a lengthy blood transfusion. He flew to Beijing a few days before the procedure to receive injections into his blood that would “activate” the stem cells.

He was then hooked up to a transfusion machine for three hours, while the healthy stem cells were extracted from his blood system. It’s unlikely that Mr Jiang will experience any negative health effects from the procedure.

Usually donors and recipients do not meet, the Red Cross says, because the patient often has recurring illnesses. In the past, if recipients met donors directly, they sometimes pressured them to donate stem cells again if their illness resurfaced.

Does Jiang Yongfeng mind that he doesn’t even know the little boy’s name? No, he shrugs.

READ ALSO :  'When my father was sick, Bianca chose not to take care of him, rather she pleased herself' - Ojukwu's first son, Emeka Jnr speaks

“I hope he can be brave and strong and he can live a good life.”