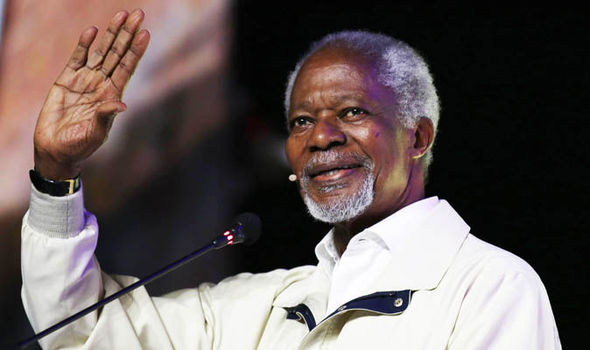 The former secretary general of the United Nations and Nobel Peace Prize winner, Kofi Annan, passed away yesterday at the age of 80.

He died on Saturday in Switzerland after battling a short illness. The demise of the top diplomat was announced by the Kofi Annan Foundation on a microblogging site Twitter. It stated,

“It is with immense sadness that the Annan family and the Kofi Annan Foundation announce that Kofi Annan, former Secretary General of the United Nations and Nobel Peace Laureate, passed away peacefully on Saturday 18th August after a short illness.

Kofi Annan reached out people at the time of suffering, and touched many hearts with his deep compassion and empathy. He selflessly placed others first, radiating genuine kindness, warmth and brilliance in all he did. He will be greatly missed by so many around the world, as well as his staff at the Foundation and his many former colleagues in the United Nations system. He will remain in our hearts forever.”

Here some facts you should know about him:

1) Kofi Annan was born on April 8, 1938, in Ghana. He had a twin sister, Efua Atta, who died in 1991. They shared the middle name Atta, which means twin in the Ghanaian language of Akan.

4) He served as the Secretary-General of the United Nations from January 1997 to December 2006. It must be noted that he was the first black African man to achieve the highest position of world’s top diplomat.

5) Kofi Annan founded the Kofi Annan Foundation after his time as the UN Secretary-General. The foundation is an independent, not-for-profit organization that works to promote better global governance and strengthen the capacities of people and countries to achieve a fairer, more peaceful world.

6) In 2001, its centennial year, the Nobel Committee decided that the Peace Prize was to be divided between the United Nations (UN) and Kofi Annan. Annan was awarded the Peace Prize for having revitalized the UN and for having given priority to human rights.

7) Mr. Annan spoke English, French and many African languages fluently. He is survived by his wife, Nane and three kids- Ama, Kojo and Nina.

During his term with the UN, he made a significant effort to set up the Global Fund to fight deadly diseases like AIDS, malaria and tuberculosis. His contribution to the UN’s first-ever counter-terrorism strategy cannot be forgotten.