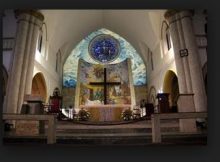 According to TheCable, a parishoner, who simply identified himself as Valentine, said the assailant struck around 9am.

He explained that the victim had just finished attending to a church member.

“They were three in number. The men came into the church as if they were parishioners,” Valentine told TheCable.

“When they arrived here, father was taking confession. As he was walking away, they approached him and told him they wanted N5,000 to pay the hospital bill of someone.

“Before you knew what was happening, they had shot him on the stomach.”