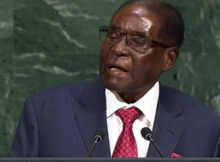 Zimbabwe’s President Robert Mugabe doesn’t seem to be a fan of USA President Donald Trump, that is if his speech at the UN general assembly is anything to go by.

While speaking on Thursday night at the ongoing UN general assembly, Mugabe appeared to mock Trump. He called Trump a “Goliath who threatens the extinction of other countries.” His statement comes after Trump threatened to “totally destroy” North Korea.

“Some of us were embarrassed, if not frightened, by what appeared to be the return of the biblical giant called Goliath,” Mr Mugabe said and claps and cheers followed.

“Are we having a return of Goliath to our midst, who threatens the extinction of other countries?” he asked.

Mugabe continued to admonish Trump to use his influence positively, saying: “Mr Trump, Please blow your trumpet. Blow your trumpet in a musical way towards the values of unity, peace, cooperation, togetherness, dialogue, which we have always stood for and which are well-writ in our very sacred document, the Charter of the United Nations.”

He also criticised Mr Trump for withdrawing the US from the Paris accord on climate change.  Mr Mugabe said that there was a need to cooperate to save the world from effects of climate change “in order to halt the inexorable march towards destruction.”