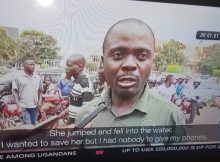 A man told an Ugandan Television station that he watched a woman drown and couldn’t save her because he had his phones in his pockets.

A Twitter user shared a photo of the man’s interview with the caption:

“This man watched a woman drown. He said he could swim & thought of jumping into the water to save her. But he had his phones in his pockets.”

The Twitter user explained that the woman who hawked handkerchiefs was being chased by the Kampala Capital City Authority (KCCA) when she fell into the river.
The man was at the scene of the incident and was interviewed by a TV crew.

He told the press that he saw the woman drown, but had no one to give his phones to so that he could jump in to save her.