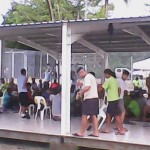 Asylum seekers inside the Manus Island processing centre have sewn their lips together in protest at their lengthy detention, poor living conditions and the prospect of resettling in Papua New Guinea.

An asylum seeker who spoke to the ABC said 15 people have sewn their lips together and 400 men are on hunger strike.

Australia’s Immigration Department runs the centre and confirmed that detainees were protesting, but said it was a passive protest and asylum seekers were not refusing food.

The asylum seeker, who asked not to be named, sent photographs of several asylum seekers with stitches through their lips, holding a banner saying: “We are asylum seekers [and] fear to be resettled in PNG please hand us to the United Nations.” From a hiding place within the Australian-run centre, the man said he was in his 20s and had gone without food for two days. “We don’t need food anymore, we don’t need water, we just need a better life,” the asylum seeker said. “We’re living in hell… I don’t know why [there’s] no justice in this universe.

“This man from Burma he said, ‘I don’t have any place to go back, if I go back the Government will kill me, they will burn even if I’m alive’.”

There are currently 1,035 men detained at the Regional Processing Centre on PNG’s Manus Island.

The PNG government has announced that 50 men have been granted refugee status and will soon be moved to a transit centre near Lorengau, Manus Island’s main town.

But the asylum seeker who spoke to the ABC said he was scared of further attacks from locals, almost a year after guards and workers stormed the detention centre, beating to death Reza Barati and injuring dozens of other detainees.

“We didn’t come to PNG country, we came to Australia and if Australia don’t want us, it’s easy brother – let them give us to United Nations or another country.

“I’m scared after all this hunger strike [the guards will] come to us and beat us again, [while we have] no power in our body.” The Refugee Action Coalition said the asylum seekers were fearful about their future and wanted refugee status and permanency.

The group released audio it said was from an asylum seeker on Manus Island.

“More than 220 people didn’t go to breakfast or lunch today and others will join us tomorrow,” the man said.

“All of us we are standing under the shelter in Mike Compound and we will never go back to our room until we die.”

Refugee Action Coalition spokesman Ian Rintoul said most of the asylum seekers have been in Manus for almost 18 months.

“For most of them there is still no refugee determination and no end in sight to the indefinite detention for what is perhaps the worst hell-hole that Australia has created,” he said.

Mr Rintoul said recent tension came to a head over plans to move those who have gained refugee status to insecure accommodation in Lorengau.

He said only 71 out of 1,000-plus asylum seekers had been granted refugee status.

“I think that this has just heightened the fears that they’re extremely vulnerable to the locals. The memory of the killing of Reza Barati is very fresh in their minds,” he said.

The detention of asylum seekers on Manus Island and the resettlement of those found to be refugees in PNG is a major plank of the Australian Government’s asylum seeker policy.

At times on Wednesday, phone lines to the detention centre were interrupted by electronic interference, beginning moments after contact was made with asylum seekers.

The media is denied access to the Manus Island detention centre and the ABC is unable to independently verify the extent of the reported hunger strike.

PNG’s foreign affairs and immigration minister Rimbink Pato could not be reached for comment.