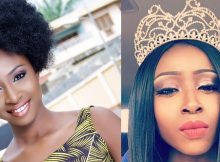 We reported on Tuesday that a second part of a s*xtape involving the 2015 Miss Anambra ‘Queen of Democracy’, Chidinma Okeke, (Watch Here). which was released online showing her face clearly as she performs s*x acts with a cucumber alongside her female lesbian room-mate, went viral amid media reactions and criticisms.

The embattled beauty queen who was expected to tell her side of the story in the scandal, had earlier scheduled to disclose her side of the story in a press conference today, but she reportedly didn’t show up, saying that her blackmailer threatened her in a phone call conversation that if she shows up and make any statement, she will be shot dead.

The revelation ( now deleted) was made on her Facebook few hours after the press conference was scheduled to begin at NUJ.

According to information disclosed by the press men who were live at NUJ center, the 3rd girl who recorded the illicit video as the beauty queen and her room-mate were performing the s*x act, is currently on the run after sending the video to a guy due to her carelessness.

READ ALSO :  Leaked CBN Documents Show How Dangote And Other Big Corporations Are Fleecing The Nigerian Economy Of Foreign Exchange

The scandal is now open for the law to take its full course. The question now is….is Chidinma innocent? Was she really blackmailed?