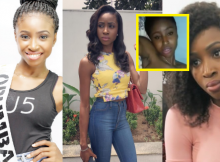 The outgoing Miss Anambra, Chidinma Okeke, was a top trending issue on Google search this week, not for winning another beauty pageant, but for a leaked sex video that went viral, according to a Daily Trust’s report.

READ ALSO :  Photos: The Nigerian Community In Asia Need Help In Locating The Family Of A Nigerian Man Named Onyebuchi Who Was Found Dead In His Apartment
According to a statement by Mr Taiwo Kola-Ogunlade, Google’s Communications and Public Affairs Manager, Anglophone West Africa, the issue was trending from Oct. 19 to Oct. 26.

Kola-Ogunlade said that in the entertainment industry, the internet showed how a #Beauty Queen Became a Hashtag

READ ALSO :  Your Bobbies Have Fallen Like The Naira – Fans Blast Actress Anita Joseph for Posting This Picture

“The beauty queen went on her social media pages to deny the video.

“She explained that her face was superimposed on an existing picture,’’ he said, adding that the beauty queen said it was an attempt by hoodlums to blackmail her.

Also top on Google search this week was the coronation ceremony of the newly-crowned Oba of Benin, Kola-Ogunlade said.

Long Live the King! After several weeks of traditional rites, Eheneden Erediauwa was finally crowned as the 39th Oba of Benin, he said.

The Google manager said that the crowned head would now be called Oba Ewuare II after the famous Benin ancestor who was credited with many significant legacies in Benin.

He said that the Benin ancestor was widely claimed to be the greatest king of the Benin Empire. Oba Ghato Kpere… Ise! WizKid (Starboy) , in his usual tradition, raised the bar on Google search as he carted away three major awards at the recently concluded 2016 MTV Africa Music Awards, popularly known as MAMA.

“The starboy was named the Artist of the Year, Best Male and Best Collaboration Awards win with Dj Maphorsia and Dj Buckz,’’ the Google manager said.

READ ALSO :  The New Kind Of Notification That You Never Want To See On Your Facebook

The News Agency of Nigeria (NAN) reports that Google Trends launched in May 2006, allows one to see how popular, search terms and its demography have been over time on Google. (NAN)