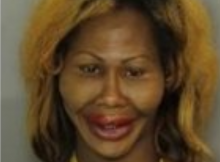 The women are; Remones McDaniel, 29; Dorell Korngay, 19; DeShawn Washington, 26 and Zyquan R. Twitty, 20. The women were also wanted on outstanding warrants and charged with Contempt of Court.  Yusef Husdon 26, of Newark and Derrick Benson, 25, of Hamburg, were also arrested and charged with Prostitution and Soliciting Prostitution.

The women’s photos were made public and their physical appearance has people wondering if men really pay to have sexual relations with them.

See their photos below.