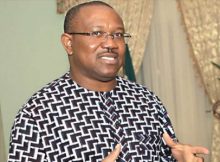 The former governor of Anambra State, Mr Peter Obi has said that Nigeria under the leadership of President Muhammadu Buhari is a failed country.

Obi made this known in Abakaliki during the 2017 independence anniversary lecture which took place at the Akanu-Ibiam international conference centre.

He expressed regret that Nigeria had no qualified leadership to revitalized the economy of the country, stressing that the country was still operating in the past.

The former governor blamed the recent rise in agitation of youths, especially the Indigenous People of Biafra, IPOB, and others across the country as a result of the poor leadership of the present administration of the federal government.

“For me, the country has failed, If anybody tells you that Nigeria is doing well, tell them it is a lie; they said that we are out of recession but almost all Nigerians are still feeling greatly the impact of recession”, he stated.

Obi, who is a guest lecturer at the event, urged the governor of Ebonyi State, Chief David Umahi to always tell the people he is ruling the truth, adding that the people will trust and believe him the more.