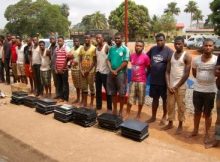 According to experts, the Nigerians are able to carry out the heist by sending phishing emails to commercial organizations and industrial enterprises, which they later steal dry. .

The FBI estimates that these phishing attacks have cost companies over $3 billion. The number of affected companies exceeds 22,143. Kaspersky Labs, an internet security company, said it has found over 500 companies that are under attack in at least 50 countries. .

Those under attack are mostly industrial enterprises and large transportation and logistics corporations, based in Germany, UAE, Russia and India.

Researchers said that all indications are that these were business email compromise (BEC) attacks that have come to be associated with Nigerian cyber-criminals. Some had attachments with names such as “Energy & Industrial Solutions W.L.L_pdf”, “Woodeck Specifications best Prices Quote.uue” and “Saudi Aramco Quotation Request for October 2016”. .

These are well crafted emails that look legitimate and are crafted to make the victim open the malicious attachment. The emails ask the recipients to check information as soon as possible, clarify product pricing or receive goods specified in the delivery note attached.

READ ALSO :  This Man Kills Girlfriend And Sleeps With Her Corpse, Says She Never Allowed Him To Have Sex With Her While She Was Alive

READ ALSO :  Must Read! True Confession: How I Allowed My Best Friend Have Sex With My Wife, Have I Made A Mistake?

Using Whois services, Kaspersky found that the domains used to host the malware were registered to residents of Nigeria. Once in, the hackers compromise a legitimate email and change the banking account details.