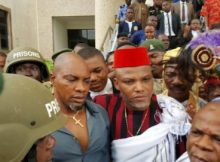 Leader of the Indigenous People of Biafra, IPOB, Nnamdi Kanu has described Igbos who refused to support the Biafra movement as ‘pigs’.

Mr. Kanu claimed that Hausa/Fulani have terrorize the Igbo socio-political organization into a “position of silence and stupor.”

Kanu wondered why nobody from the South East has been arrested for declaring Oduduwa Republic but law enforcement agents have been coming hard at those clamouring for the restoration of Biafra.

According to him, “I will not belong to one Nigeria and can never want it, did the Yorubas not announced Oduduwa Republic? Has anyone been arrested?

“Why Is it that we declare Biafra and they are arresting and shooting at us and Ohanaeze has said nothing.

“I want to stress that if you are a Nigerian you are evil and a child of Satan.

“We are tired, don’t want to stay in a country were you wake up in the morning and they sack you. The other day they sacked from military officers from the South East and nobody is talking.

Kanu also claimed that only Buhari’s family members occupy DSS and insisted that, to stay in Nigeria is evil in every way.