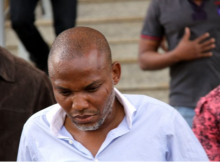 The Odu’a Peoples Congress has blasted and warned the leader of Nigeria’s secessionist’s group, the Indigenous People of Biafra (IPOB), Nnamdi Kanu over disparaging remarks on former president, Olusegun Obasanjo.

The OPC also warned him against uncomplimentary remarks about a former Governor of Lagos State, Asiwaju Bola Tinubu, and other prominent Yoruba leaders.

It however said it supported the aspirations of all self-determination groups who pursued their aims through non-violent means.

“The OPC also supports the genuine aspirations of all self-determination groups who pursue their aims through non-violent means.

“The Nigerian constitution and several international charters, to which the country is a signatory to, recognise the right to freedom of association by anybody, whether individual, corporate or institutional.

“However, in supporting such agitations, we must not shy away from rebuking Nnamdi Kanu for the aspersions he has been casting in the direction of our revered leaders. Kanu’s repeated condemnation of former President Olusegun Obasanjo; former Governor of Lagos State, Asiwaju Bola Tinubu and others is condemned in the strongest possible terms.”

It added, “The idea of respect for elders might be alien to Kanu and his ilk, but it is a fundamental part of the Yoruba culture and tradition and we cannot afford to overlook such transgressions.

“We therefore use this medium to warn Kanu and other such individuals who are fond of making careless comments in relation to our leaders; that OPC will no longer sit back and allow this bunch of nonentities to disrespect our leaders or to use them to score cheap political scores.”