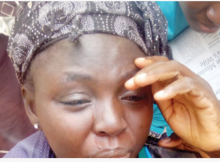 The police in Bauchi have arrested, Juliana James, a mother-of-six, who threw her day-old baby into a soakaway pit after being delivered of the child at home, the Punch is reporting.

The suspect, who wept bitterly when paraded at the police headquarters in Bauchi on Friday, said she was forced to dispose off the child because of economic hardship as she could not include the burden of taking care of it together with her six other children.

READ ALSO :  End Time: Couple Having Sex In Inside Car In Front Of Their Little Daughter

“Things are hard. My husband has no job. He had an accident three months ago and it affected his manhood. He is still in the hospital receiving treatment.

“I delivered at home and threw the baby in the toilet because I don’t know how we are going to take care of it. I didn’t tell my husband.”

The day-old baby was rescued alive after 12 hours of being inside the pit when her cry attracted neighbours who rushed it to the Abubakar Tafawa University Teaching Hospital for medical attention.

Addressing newsmen, Commissioner of Police in the state, Zaki Ahmed, said the case was being investigated, revealing that the baby had been handed over to social welfare officers at the hospital.

The worrying trend of new mothers disposing their newborns is becoming very alarming. Just last month, the police arrested an 18-year-old who dumped her four-month-old baby under the Oshodi bridge in Lagos.

Late last year, residents of Uyo watched as an abandoned baby cries herself to death. Nobody tried to rescue her for fear of being arrested by the police.