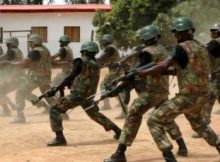 The Nigerian military doesn’t seem ready to pack up and leave Abia state despite agreeing to vacate the state due to heightened tension and general unrest.

The army explained that its Operation Python Dance II Exercise is meant to sharpen the skills the troops in the conduct of Internal Security Operations.

According to him, the operation is not “targeted at any individual or group, as law abiding citizens are advised to go about their normal businesses without fear.”

He said the exercise is also aimed to combating the security challenges in the South East and is well equipped to deal with the rising cases of insecurity such as kidnappings, farmers-herdsmen clashes, cultism, armed robbery, communal crisis, violent secessionist agitations, insurgency among others.