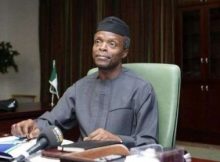 Acting President Yemi Osinbajo is currently meeting with the governors elected on the platform of the All Progressives Congress at the Aso Rock Presidential Villa in Abuja.

Details of the meeting is still sketchy but feels believed it may not be unconnected to hs last visit to the ailing President, Muhammadu Buhari in UK.

The meeting began shortly after the National Economic Council which the acting president presided over.