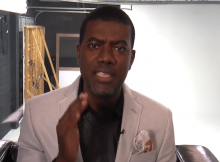 As shared by Reno… Read below.

I read the statement by the former Deputy Director of the Buhari Presidential Campaign Council, Mallam Mohammed Lawal with great amusement.

I find the allegation laughable. Why, you may ask?

Well, because it is silly for any ally of President to say Atiku Abubakar plotted President Buhari’s failure. Does anybody need to plot the failure of a man who still calls Germany ‘West Germany’? Was it Atiku’s plot that made Buhari wait and waste six months before setting up a cabinet of square pegs in round holes? Atiku did not force Buhari to make promises he could not keep like making $1 equal to ?1 or creating 3 million jobs per annum.

Even before day one didn’t Nasir El-Rufai warn Nigerians in 2010 that ‘if you ask Buhari, he will think that Blackberry is a fruit.’

A serial plagiarizer who plagiarized Barack Obama’s and Charles De Gaulle’s speeches, who surrounds himself with the likes of Amaechi, who is still afraid of rats as an ex general, needs no one to plot his failure!

Just as you have an auto-correct function on your phone, so does President Buhari have an auto-fail function in his government. He does not need an Atiku to plot his failure!

Let me cite an example. Two weeks ago, Benue state experienced a cataclysmic flooding of almost biblical proportions. Many pundits, including yours truly, appealed to the President to at least visit the victims of the flood to give them moral support.

However, the President chose to ignore the 100,000 families that had been rendered homeless and I thank God that this same Atiku Abubakar who they claim is plotting the President’s failure was able to plot his way to donating ?5 million to the suffering victims.

But that is not where the story ends. President Buhari who refused to visit Benue shocked right thinking people by visiting Kaduna even while the people of Benue (who coincidentally voted for him) had not had the pleasure of his visit.

Recall that when Nigerians were facing possibly the worst food crisis in our history, Buhari’s minister of agriculture was more focused on importing grass for cows from Brazil. And even after herdsmen killed vast amounts of people in Southern Kaduna the APC Governor of Kaduna admitted to paying them compensation for their cattle killed. Perhaps the President would have postponed his visit to poultry chickens in favour of visiting paltry citizens in Benue.

Can his handlers continue to blame Atiku Abubakar for these unforced errors?

President Trump who we unfairly like to criticize in this part of the world has visited Texas twice to help out with Hurricane Harvey relief efforts and to project hope to his people. His office has equally announced plans to visit Florida after Hurricane Irma eases. And here our President is visiting poultry!

And look at what is happening in the Southeast. Do we blame Atiku for this avoidable crisis too?

Until Nnamdi Kanu was arrested by Muhammadu Buhari he was unknown to most Nigerians and this include Nigerians of Southeastern origin. The president actually created Nnamdi Kanu, made him a celebrity and gave him the power he has right now.

Right now he has empowered the young man to do a lot more damage to him and his inept administration by making him a cause célèbre that even foreign diplomats go to pay homage to. What was Nnamdi Kanu doing before President Buhari had him arrested? Radio Biafra? How many people were listening to it?

What President Buhari did by arresting Nnamdi Kanu was to turn him from a Bright Chimezie to a Michael Jackson without releasing a Thriller album!

And to make matters worse, he has now initiated this unnecessary, ill thought out, ill advised and ill fated so called Operation Python Dance 2 in the Southeast.

The US Army is in Texas and Florida helping hurricane victims. That is what I expect the Nigerian Army to do in Benue , where 100,000 families have been rendered homeless by flood, not doing a ‘Show of Force’ in a place that is need of persuasion not threats.

Four days ago suspected herdsmen killed 20 people in Ancha village in Miango district of Jos. If the army wanted to do a ‘show of force’, that would have been a good place to start. It makes no sense to do a show of force in a peaceful community when you have violence prone communities all over Nigeria.

Since when did the dictionary definition of intimidation change to ‘show of force’? Please let us call a spade a spade and not a big spoon.

The injustices under the Buhari administration are just too glaring, to blatant and too obnoxious.

Arewa youths gave their fellow Nigerians a Quit Notice and they get a song and dance from the Buhari administration. IPOB youths who did not threaten other Nigerians get Python Dance from the same government. How is that fair?

Ignorance is a disease and the Buhari administration appears to be heavily inflicted by this disease. If not, they ought to have known that no nation on earth has permanently put down a separatist movement by force of arms alone.

History does not repeat itself. Men repeat history. The United States has 14 separatist movements. England invited her own separatist movements to form regional govt in Ireland and Scotland. In the case of Scotland, they even threw in a referendum into the bargain!

President Buhari could have defeated Nnamdi Kanu’s IPOB and its separatist agenda if he had only been equitable and just in his management of Nigeria.

Buhari’s appointments overwhelmingly favour the North. The military and security agencies are almost entirely in the hands of not just Northerners, but core Northern Muslims.

These are the appointments in the security agencies. Even if you are a core Northern Muslim, as long as you fear God, you can see that this list is obviously lopsided in favour of the core North.

In fact, the President has even stopped pretending. At the last eid-el-fitri, President Muhammadu Buhari discarded all pretense and addressed the nation in Hausa, the language of the core North.

When you take into consideration his famous comment, to wit “the constituents, for example, gave me 97% cannot in all honesty be treated on some issues with constituencies that gave me 5%”, you can now see how alienated he has made the South feel from Nigeria.

Since his swearing in as President of Nigeria, President Buhari has not seen it fur to visit the Southeast yet this is a man that said “I belong to everybody, and I belong to nobody” (never mind that he plagiarized Charles De Gaulle.

If President Buhari wants to end the Biafran agitation, he needs to, with urgency, retrace his steps and start acting like he is the President of Nigeria, and not the President of core Northern Muslims only. The day he makes this paradigm shift, will mark the day that separatist agitation will  start to fizzle out.

President Buhari does not need guns to quell any separatist movement. All he needs is guts.

READ ALSO :  There is tension In Nigeria Yet Buhari Is Posing for pictures In London Like A fading And Ageing Playboy Model-FFK Says

This week’s nugget is very special to me. It is directed at one Peter Odumosu, a man who has for weeks been going around social media spreading false and wicked lies about me to the effect that I stole government money. In this regards he was helped by one Olumide Dada, a certain Dr. Yomi Ogunyemi and one Kola Arubayi who joined him to cast aspersions on my character that have no bearing on reality. To them I prayed to God whom I have served with what I believe is a pure conscience from my childhood, during my recent pilgrimage, that if their allegations against me are true may God punish me and do so publicly. However, if they have falsely accused me, may God fulfill the word He confirmed in 2 Thessalonians 1:6.

Congratulations guys, you made it onto my column in ThisDay newspaper. To all of you I say the following

If you see someone ‘flexing’, don’t hate or falsely accuse them of flexing ‘with other people money’. Instead, study what makes them flex. If you hate a successful person, you can NEVER attract what you hate. The Bible says “He that walks with wise men shall be wise: but a companion of fools shall be destroyed”-Proverbs 13:20. The main reason haters don’t succeed, is because they walk with bitterness instead of walking with God! #RenosNuggets

And to Enebeli Theo, Adamu Usman Attaboh, Ogbonnaya Kanu and Ebi Warekromo. I say God bless you for coming to my defense without being asked. That’s what true friends are for.

And for all those who sat on the fence, joking and exchanging banters while these people engaged in the vilest form of character assassination, I pray that in your own time of false accusation, you will have friends like Enebeli Theo, Adamu Usman Attaboh, Ogbonnaya Kanu and Ebi Warekromo and not friends like yourselves. In Jesus’ name I seal all that I have written here.