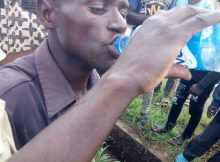 According to Facebook user Nke Nke Enyi Izuogu this Man was allegedly caught spraying his urine on the cucumbers he’s selling in Owerri, Imo State,and was forced to drink it; Happening now at Federal housing estate umuguma owerri.
This man was caught spraying his urine on the cucumber he was selling and was forced by the mob to drink it and also eat the cucumber it took him over 20minutes before he accepted to drink it. Be careful what you buy from these vendors.