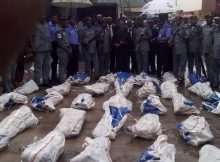 The container which arrived Nigeria from Turkey, was labeled to be carrying Wash hand basins. The guns were discovered during an inspection by some officers in the command. Controller General of Customs, Col. Ahmed Alli , who was at the command where the guns were intercepted and paraded before newsmen, said one of the agency’s officers believed to have cut the seal of the container without following due process, as well as a clerk  at the command, had been arrested in connection with the discovery.