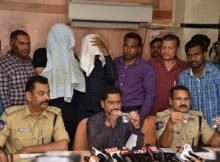 Two persons including a Nigerian national were caught with cocaine in Hyderabad, India on Saturday, July 8th. The Nigerian identified as Bernard Wilson, 26, and a 23-year-old Mohd Zeeshan, a hotel manager were arrested by Telangana’s excise officials for allegedly peddling 12 gm of cocaine, each gram costing over Rs 10,000, near two prominent star hotels in Begumpet and Banjara Hill.

The duo would get in touch with buyers through social media and sold the drug that set their clients back Rs. 10,000-15,000 for a gram.

The arrests come soon after the crackdown in Hyderabad on a network peddling psychotropic substance LSD to school and college students.

Addressing a press conference on Saturday, Ajay Rao, joint Commissioner in Excise Enforcement Department said Ali came in contact with Williams at a club in Jubilee Hills after which he started selling cocaine through some persons known to him for the last six months.

Williams was procuring the contraband from Kenneth, another Nigerian national, who is absconding, via courier. He would then hand it over to Ali. Williams was staying in the city on an expired passport and was arrested in 2016 along with three others on similar charges, Rao added.
Ajay Rao says the clients in this case are possibly party-goers and those with deep pockets. The lucrative business model involves a multilevel marketing network, with incentives for peddlers who bring more clients. 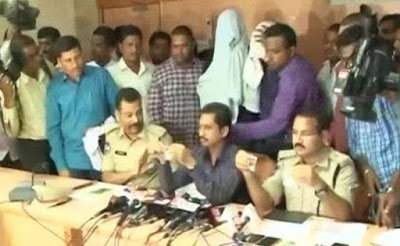 “It is an organised chain system. Those in the network lure new customers by offering either a dose of drug for free or a discount. It is the classic multilevel marketing model. When their prey gets addicted but can’t afford to buy another dose, he tries to lure someone else who can pay.”

READ ALSO :  Linda Ikeji Has Become Too Materialistic And Has Lost All Her Godwill She Is No Longer An Inspiration – Jola Sotubo

The two suspects were using coded language on popular messaging service WhatsApp to communicate about their drug deals, officials have found.

The recurrence of various coded words, including ‘Chik 1’ and ‘Chik 2’, found frequently in the WhatsApp chats of Bernard Wilson and Mohammed Zeeshan Ali, STF officials said, adding that even the addresses to which they were supposed to deliver the stuff appeared to be written in coded language.
STF personnel made efforts to collect more information from Williams but his slang and broken English made it difficult for them to decipher what he was saying, they said.
“He at first claimed that he did not know anything. But gradually, he revealed that it was another Nigerian national, Kenneth, who was supplying him cocaine by courier,” an official said.
“We have seized four mobile phones from the possession of Ali and Williams. Once we analyse the call data, we will be able to find out the role of other persons,” Rao said.
Another official said efforts were on to examine the Facebook accounts of both Ali and Williams.
“We might find out the list of clients from WhatsApp messages and details on Facebook,” he said.
The STF would also probe whether Ali sold the contraband to guests at the events he organised.
“As and when we get information, we will conduct raids and nab those involved in the supply of drugs,” the official said.