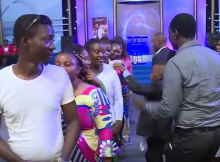 The Founder and General Overseer of Christ Mercyland Deliverance Ministry in Warri, Delta state, Prophet Jeremiah Omoto Fufeyin, did something quite shocking during one of the church services recently.

While preaching, he asked a single lady to stand up and asked her if she was interested in getting married. The lady said yes and then he asked her to go around the church to pick any brother that she would like to marry (point and kill). The lady walks around and then informs him that her dream man isn’t among the congregation. The Pastor then asked if there were single men who were interested in marrying her. Eight men ran out and when he asked the lady if she likes anyone of them, she responded No!. The pastor then turned to the congregation and asked the single ladies in the church to come out and pick anyone of the brothers standing on the altar. The single ladies filed out in their numbers. In some cases, eight ladies stood behind a brother they were all interested in. Watch the video below