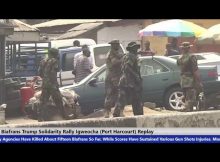 “On Friday, 20th of January 2017, Biafran sympathisers from all works of life gathered in Portharcourt ( Igweocha) to felicitate with the incoming president of America, Donald J Trump.

During the peaceful assembly, members of the Nigerian Security agencies who were there to forestall break down of law and order opened fire on unarmed, defenceless Biafran sympathisers.”

“It is a cardinal sin for an armed forces member to open fire on an unarmed person, no matter what the unarmed person is doing or saying as long as he poses no threath. Under the rules of engagement, a military personnel is not allowed to open fire on a civilian in a non combat situation unless a clear and present danger exists. It should also be noted that Chapter 4 of the Nigerian constitution allows everyone certain “freedoms”.

Freedom of movement, expression and conscience. So it doesn’t matter If IPOB were celebrating the swearing in of Donald Trump or the Birthday of Mahatma Ghandi, it is their right to do so. The law also allows them “freedom of conscience” which means that they are allowed to believe in Biafra if they so wish. So when IPOB exercise the freedoms accorded to them by the Nigerian constitution and the security agents who should be upholding the law turn around to desecrate the constitution by shooting unarmed people, we should all rise and condemn it because it could any of us tomorrow.

It could be any of us tomorrow out on the streets protesting, maybe not over the issue of Biafra but protesting none the less. Why should exercising our constitutional rights attract shootings from the very people who are paid to protect the populace? Below are 3 links showing 3 youtube videos showing the way the Nigerian security agents killed and brutalised people in Portharcourt last Friday. link one shows a young man lying motionless on the ground obviously dead.

It also shows an old man who badly beaten by the police recanting his experience. Link 2 shows several people in a bus with different degrees of injury, a young man had his head smashed by a Soldier. The last link is a young man wearing a blue shirt who was shot and the Biafran family writers tried to help him. IPOB has reported that not less than 15 people were killed, over 80 hospitalised for various degrees of injury and nearly 200 so far unaccounted for. Anyone with an ounce of dignity in them should feel ashamed that the giant of Africa is still a country where life means nothing.”