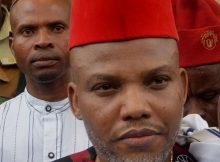 he younger brother of the leader of the Indigenous Peoples of Biafra (IPOB), Nnamdi Kanu, has called on the Nigerian Army to release the corpse of the secessionist group leader if they have killed him.

The younger Kanu had an interview today where he said that since the September 14th “invasion” of his brother’s home by military officers, no one knows the whereabouts of his brother, Nnamdi as well as their parents.

READ ALSO :  Is The Nigerian Army Teachable? by Pius Adeyemi

He called on the international community to help in calling on the Federal government to release his brother dead or alive.