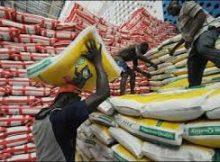 Rice farmers, millers and processors on Wednesday announced that the price of a 50kg bag of rice will fall to as low as N6,000 in the next few months.

The operators said the current market price of rice, which is about N15,000 per 50kg bag, will drop to between N6,000 and N7,000 in a couple of months, going by the bumper wet season harvest by rice farmers.

Speaking on the sidelines of a meeting between rice farmers/processors and the Minister of Agriculture and Rural Development, Chief Audu Ogbeh, at the ministry’s headquarters, in Abuja, the National President, Rice Farmers Association of Nigeria, Mr. Aminu Goronyo, said the operators had resolved to currently reduce price of rice to N13,000 per 50kg, but stressed that the price would further drop to N6,000 in a few months

He said, “This is just the beginning, the actual price of rice will come down because we are expecting a bumper harvest this year. We have sat down with the millers and have agreed that we are going to work together for the interest of Nigerians. I think you have been buying a bag of rice at the cost of N18,000, but today the price is between N13,000 to N15,000, meaning that the price is coming down.”

READ ALSO :  Here Is Tips On How You Can Magically Lighten Dark Armpits Very Easily! (Video)