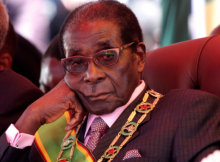 Days after the World Health Organization named Zimbabwean President, Robert Mugabe as a goodwill ambassador, a move that angered and stunned human rights activists, it rescinded the appointment.

WHO Director-General Dr. Tedros Adhanom Ghebreyesus said “I have listened carefully to all who have expressed their concerns, and heard the different issues that they have raised. It is my aim to build a worldwide movement for global health. This movement must work for everyone and include everyone.”

Tedros said he consulted the Zimbabwean government and concluded it’s in the organization’s best interests.

The public health agency announced the appointment on October 19, 2017, saying the African leader would focus on noncommunicable diseases on the continent such as heart attacks and strokes but the public outcry that followed led to the new decision.